Simulation is an imitation of reality. To simulate is to try duplicate the features, appearance and characteristics of a real system. In general simulation involves developing a model of some real phenomenon and then performing an experiment on the model evolved. This technique of simulation has long been used by designers and analysts in physical sciences and it has become an important tool for tackling the complicated problems of managerial decision making.

Probably the first important application of simulation was made by John Von Neuman and Stanislaw Ulam for studying the tedious behavior of neutrons in a nuclear shielding problem . With the remarkable success of the technique on neutron problem, it became popular and found many applications in business and industry.

Simulation is the process of designing a model of a real system and conducting experiments with the model for the purpose of understanding the behavior for the operation of the system.

2. According to Levin and Kirk Patrik

3. According to  Donald G. Malcolm

A simulated model may be defined as one which depicts the working of a large scale system of men, machines, materials and information operating over a period of a time in a simulated environment of the actual real world conditions.

4. According to Naylor et al.

Simulation is a numerical technique for conducting experiments on a digital computer, which involves certain types of mathematical and logical relationships necessary to describe the behavior and structure of a complex world system over extended periods of time.

“X simulates Y” is true if only if:

Some examples of simulation:

Simulation process consists of various stages. The initial stage requires that problem must be identified and formulated. This step necessitates the specification of performance criteria, decision rules and Model Parameters. Once the model components are identified then model itself is developed and analyzed. Once the model is developed, it must be validated to determine whether the results will be reliable or not. This process in simulation is a difficult task. The next stage is the design of the experiment to be conducted with this model. This is the most famous characteristic i.e. the ability to experiment on the system. Once the results are obtained then it must be determined whether the additional experiments are to be conducted or not. 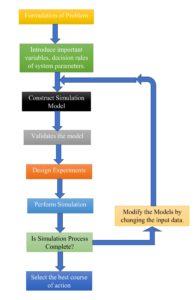