Skip to content
By simplinotesadminPosted on March 30, 2022April 4, 2022Posted in Management Notes, MBA, Organisational Behaviour, Principles and Practices of Management

Management roles depend on the formal authority which is delegated to the manager in an organization. The degree of authority determines his status and different role. In performing a particular role, the manager uses his skills and other characteristics.

Henry Mintzberg has identified 10 roles in three sets of functions that a manager has to perform. These are: 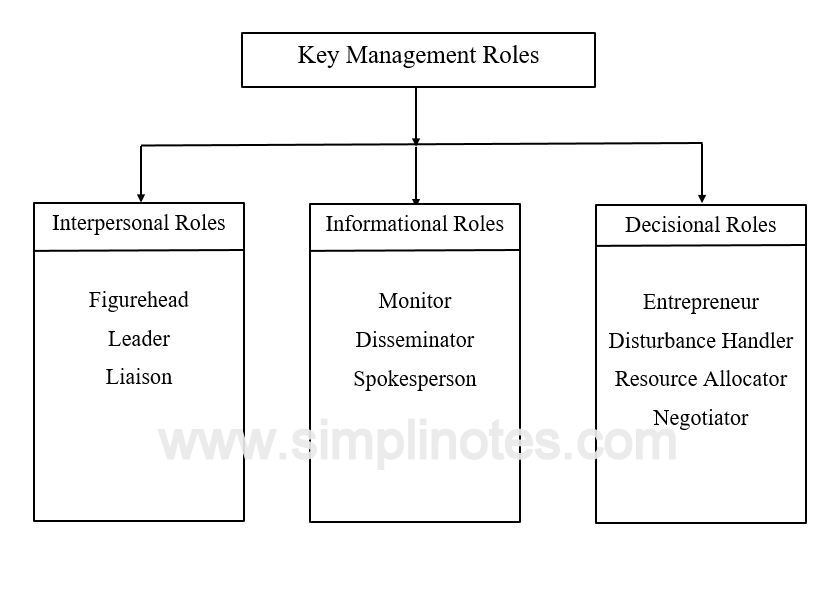 In this role, a manager performs duties of legal or ceremonial nature, such as welcoming visitors, giving testimonials to employees, and performing other similar roles.

In the role of an effective leader,  a manager provides a dynamic leadership to his subordinates by guiding, instructing and motivating as well as maintaining healthy relations with them.

This is one of the important roles of a modern  manager. Performance of any organization largely depends on the relations among its different departments and branches. In this role, the manager establishes horizontal contacts among various departments and coordinates their activities. In today’s context, liaison officer is also responsible for external relations.

This role is concerned with ensuring a smooth flow of required information. A manager tries to collect, furnish and disseminate relevant information within and outside the organization to facilitate its smooth functioning. Informational roles include:

In this role, a manager receives and analyses information from outside and within the organization, and also transmits the same to appropriate people.

The manager transmits the information to appropriate persons, both within and outside the organsiaiton. He disseminates information by mail, phone, meeting and other suitable media. In this way, he shares the information and experiences with others.

Here, the manager acts as a representative of the organization to transmit information to the outside world. He plays the role of a spokesperson with trade union, media, government officials and other. Thus, he provides information on behalf of the company.

This is the most relevant managerial role. A manager takes decisions on various aspects and gives judgements. Decision roles include:

A manager assumes the role of an entrepreneur when he initiates changes in the organization to bring about innovation and improvement in the existing methods or technology.

The manager acts as a troubleshooter and provides a speedy solution in a crisis. In case of an accident , breakdown of machines, dispute or conflict among employees, strike or lockout, loss of variable customers, failure of contracts etc. he is required to handle the situation swiftly and tactfully. He performs the role of a crisis manager.

The manager allocates resources- human, physical and financial to various organizational units according to their need.