Skip to content
By simplinotesadminPosted on October 16, 2021February 3, 2022Posted in Organisational Behaviour

Formal Authority Theory
The views of classical management theorists and those of Max Weber on the nature of authority have much in common, in spite of their independent development. Both are theories of formal authority which stress hierarchy and legitimisation from top.

Classical Theory
The classical theory holds that the authority inherent in a managerial position is achieved by delegation from the higher positions. In a corporate entity, shareholders may delegate authority to board of directors which may delegate to the chief executive. This process goes on till the last level of the organisation, as shown in figure: 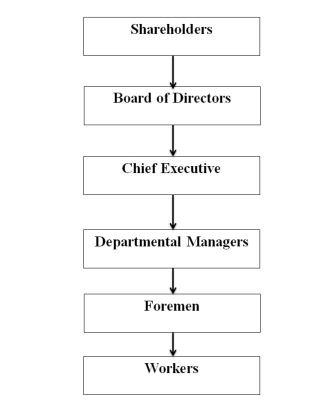 Flow of this authority is known as top-down authority. Thus, each manager in the organisation has specific set of authority delegated to him and built into the role prescriptions of his position. The real authority vests at the top level in the organisation. The authority at the top level arises because of provision of private property, social systems, or constitution, etc. Irrespective of the specific source to which the ultimate authority is attributed, the classical theory of authority is basically a statement of what the situation should be if goal achievement is to be maximised. It establishes role prescriptions for managerial jobs. Authority at various levels of the organisation is required because mangers at each level are responsible to get the things done which are assigned to them. Therefore, classical thinkers have suggested parity of authority and responsibility.

Views of Max Weber
Weber’s views on authority have the same prescriptive character: if an effective administrative organisation is to exist, authority should be of certain kind. Is developing this theme, he contrasts three types of authority: rational-legal, traditional, and charismatic. According to Weber, rational-legal authority is the common feature of the most organisations existing today. It has its source in the enactment of law. This authority rests not in individuals, but in positions and rules and regulations that surround them. Weber contrasts this authority with two others. Traditional authority has its source in the sacredness of the social order and is inherited and follows long-established precendent, for example, feudal system of social organisations. Charismatic authority has its source in the affectual and personal devotion of subordinates. The personalities of both the ‘great man’ and those who respond to his directives are part of the authority process. There is in this instance a considerable overlap with acceptance theory, an overlap which is not present in other two types of authority.

Acceptance Theory
Acceptance theory views authority as being present when a directive is legitimised by virtue of its acceptance from below. Authority exists when subordinates are willing to be directed. For the first time, Barnard challenged the traditional concept of flow of authority from top to bottom. According to him:
‘Authority is the character of a communication (order) in a formal organisation by virtue of which it is accepted by a contributor to or a member of the organisation as governing… or determining what he does or is not to do so far as the organisation is concerned.”
An essential ingredient of Barnard’s concept of source of authority, not always readily apparent, is that the person subject to authority voluntarily accepts it. If the acceptance is lacking among sufficient number of the employees affected, the manager has lost whatever power was involved in his authority, and finds that his right has become meaningless.
Under the acceptance view, organisational members make What amounts to a contractual agreement when they enter employment. They agree to work and accept authority in return for rewards such as pay and other benefits. This implicit Contract involving contributions and inducements does not, however, extend to acceptance of all directives, whatever their nature. There is infact a ‘zone of indifference’ within which employees will permit authority to be exercised. Beyond this zone, acceptance does not occur, and, thus, authority does not exist. The idea of a zone of indifference denotes that individuals tend to set specific limits within which they will respond willingly to the exercise of authority over them. Each person, thus, defines for himself three approximate categories for classifying possible actions:

(1) actions that are clearly unacceptable and which will not be carried out;

(2) actions that are borderline cases, either barely acceptable or barely unacceptable; and

(3) actions that are unquestionably acceptable. This third group constitutes a zone of indifference. These actions are acceptable to the individual and will be performed by him without question as to the authority which is seeking to put him into effect.

The size of an individual’s zone of indifference is related to the evaluation he makes of the inducements to cooperate compared to the burdens and sacrifices involved. According to Barnard, the range of orders accepted will be very limited among those who are barely induced to contribute to the system. From this, it follows that the higher the position held in the hierarchy of the organisation structure, the wider is the zone of indifference as shown in figure :

Competence Theory
In addition to formal and acceptance theories of the sources of authority, there is a feeling that authority is generated by personal competence. Urwick identifies formal authority as being conferred by organisation, ‘technical authority’ as being implicit in special knowledge or skill, and ‘personal authority’ as being conferred by seniority or popularity.30 A person may get his order or advice accepted by others not because he is having any formal authority, but because of his personal qualities. These qualities may be technical competence and social prestige, such as competent engineers, economists, etc., in the organisation whose advice may be sought and followed unerringly as if this is an order. Similarly, in other social groups, people with charisma have the same effect.
The various theories suggest the sources of authority. No doubt, the acceptance and competence theories suggest how and why an individual obeys the order of another, one cannot discount the importance of formal authority. The formed authority may be regarded as basic to managerial job, and other two as the product of power. Nevertheless, in management literature, above three sources of authority are used.

In an organisation, the quantum of authority decreases at successively lower levels; it is maximum at the highest level and minimum at the lowest level as shown in figure: 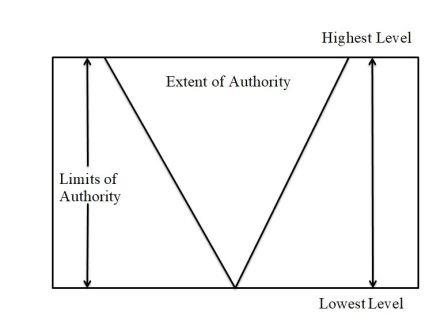 The authority is not absolute. The authority enjoyed by an organisation is exercised subject to various social, legal, political, and economic factors. Similarly, the use of authority by a superior over his subordinates is restricted by various factors. These factors are as follows:
i. The authority is exercised with regard to mores and folk ways of the group concerned. The use of authority generates different reactions from various groups. The authority must be exercised keeping in view the group’s fundamental social beliefs, codes, creeds and habits, otherwise the effective exercise of authority is limited.
ii. There are biological limits on the authority. Human beings do not have the capacity to do certain things. An individual cannot be asked to walk up the side of a building. Similarly, there are physical—climate, geography, physical laws and others, economic competition, market factors, etc., and technical limitation on the use of authority. These all suggest that an individual cannot be ordered to do a thing which is not possible because of these limitations.
iii. There are certain limitations which restrict managerial authority. Such factors as partnership agreements, memorandum of association, articles of association, business laws, and company laws put limitations on authority. A manager has to exercise authority in these contexts. Changes in these can be made, but these can be done through a definite procedure and not at the whim of a manager.
iv. A manager’s authority is limited because of the fact that his span of management is limited. There is a limit on the number of subordinates who can be effectively managed by a superior. The exercise of authority requires to take decisions and a manager cannot take such decisions about unlimited number of persons. Thus, his authority is limited to the subordinates who are managed by him.
v. A manager can use the authority which is specifically delegated to him. Delegation of authority is required because of the assignment of duties and responsibilities.