Skip to content
By simplinotesadminPosted on June 7, 2018November 10, 2021Posted in Uncategorized 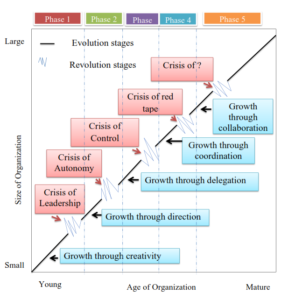 During this phase, the professional managers and key staff take most of the responsibility for instituting direction, while lower level supervisors are treated more as functional specialties than autonomous decision-making managers. Thus, directive management techniques enable the organization to grow, but they may become ineffective as the organisation becomes more complex and diverse. Since lower level supervisors are most knowledgeable and demands more autonomy in decision making, a next period of crisis i.e. crisis for autonomy begins. In order to overcome this crisis, the third phase of growth – Growth through delegation emerges.

Resolution of crisis for autonomy may be through powerful top managers relinquishing some of their authority and certain amount of power equalization. When the organisation gets to the growth stage of delegation, it usually begins to develop a decentralized organisation structure which heightens motivation of the lower levels. However with decentralization of authority to managers, top executives may sense that they are losing control over a highly diversified operation. Field managers want to run their own shows without coordinating plans, money, technology, or manpower with the rest of the organisation and a crisis of control emerges. The crisis can be dealt with the next evolutionary phase i.e. the coordination phase.