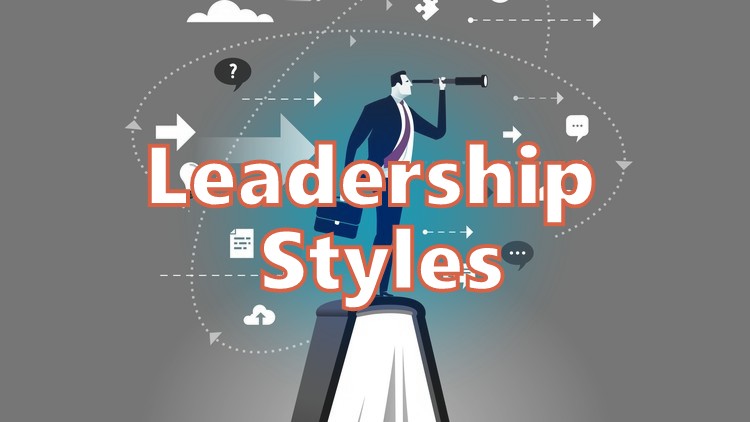 B. Based on situational approach

This model was develop by Fiedler and his associates. According to this model effective group performance depends on the proper match between the leader’s style and the degree to which the situation givens control to the leader.

Fiedler has identified leadership styles on two dimensions :Task directed and Human relations orientation. The leader derives satisfaction out of the task performance. Human relations style is concerned with achieving good interpersonal relations and achieving a position of personal prominence. Fiedler used two types of scores to  measure the style adopted by a leader : scores on least preferred co-worker (LPC) and scores on assumed similarity (AS) between opposites. Rating on least preferred co-worker was based on an individual’s liking or disliking of working with other individuals in the group and measured on sixteen items such as pleasant-unpleasant, friendly-unfriendly, accepting-rejecting and so on. Rating on assumed similarity was based on the degree to which leaders perceived group members to be like themselves. The scores on two ratings has very high positive correlation.

Though there may be many situational factors affecting leadership effectiveness. Fiedler has identified three critical dimensions of situation which affect a leader’s most effective style. These are leader’s position power, task structure and leader-member relations.

This is determined by the degree to  which  a leader derives power from the position held by him in the organisation which enables him to influence the behavior of others. In the case of a manager, it is authority delegated to him. As Fiedler points out, a leader with a clear and considerable position power can more easily obtain followership than one without such power.

Task structure refers to the degree to which the task requirements are clearly defined in terms of task objectives, processes and relationship with other tasks. When the tasks are clear, the quality of performance can be more easily controlled, and group members can be held responsible for performance than tasks are unclear.

It refers the degree to which followers have confidence, trust and respect in the leader. Fiedler has considered this dimension as the most important for the leader as his position, power and task structure are subject to control by the organisation and these can be prescribed. However, the leader has to build his relations with the group members on his own, If the group members have positive thoughts about the leader, leadership would be more effective. 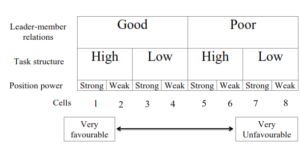 Relationship between style and situation

i. Task-directed leadership style tends to be better in group situations that are either very favourable or very unfavourable to the leader.

ii. Human relations-oriented leadership style tends to be in group situations that are intermediate in favourableness.

The leader who makes wrong decision in this highly unfavourable situation is better off than the leader who makes no decision at all. Similarly, human relations leader is more effective in intermediate range of favourableness of situation because he can get the work done by using his interpersonal skills more than insisting on the work itself. 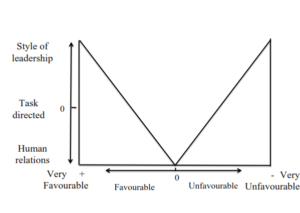 This model was criticized on the ground that it is tough for the leaders tochange their style when the situational characteristics change. Further, Fiedler’s model seems to be reverting back to a single continuum of leadership style, suggesting that there are only two basic leadership styles, while most studies indicate that leadership styles can be plotted on two axis. Thus, it not necessary that a leader who is high on one dimension, is low on other dimension.