Skip to content
By simplinotesadminPosted on March 5, 2022April 4, 2022Posted in Management Notes, Organisational Behaviour, Principles and Practices of Management, Uncategorized

Various methods  of job  Evaluation  may be grouped  as under

It is the simplest method of job evaluation. According to this method, jobs are arranged from highest to lowest, in order of their value or merit to the organization. Jobs can also be arranged according to the relative difficulty in performing them. The following table is a hypothetical illustration of ranking of jobs.

The variation in payment of salaries depends on the variation of the nature of the job performed by the employees.

In this  technique.  a written jobs  description  is prepared for  every job.  The  job  descriptions   are  then  studied  and  analysed.  the  differences between them  in terms   of duties,  responsibilities,  skill  requirements,   etc.  are noted. Each job  is assigned  a rank   depending  upon  its relative significance. Several raters may  independently   rank   each  job.   The  average of  these   ratings  is  calculated  to determine  the  final  ranking.  The  following table  illustrates  the  procedure:

In this  method,  the  rater   is required  to keep  in mind  all  the jobs  being  ranked. This  may  not be possible  when  the  number  of jobs  is large.  The  rater   may  overlook significant differences among jobs.  As a result  accuracy of ranking may be low. Paired comparisons  can  be  used   to  overcome this  problem.

In this  technique each job  is paired   with  every other  job in the series. The  more  difficult job  in each  pair  is identified.  Rank  is then  assigned on the  basis   of the  number  of times   a job  is rated   more   difficult. For  example, the pairs  and  ratings  in an  organisation  may  be  as  follows :

(i)   It is the simplest and the oldest method.

(ii)    It is very economical and less time consuming.

(i) It does not indicate the degree of difference between different jobs. It merely reveals that one job is more important than others.

(ii) It involves subjective judgment because a job is not analyzed and key factors are not compared. Therefore, it is less accurate and is not fully reliable.

(iii) The rater is required to be thoroughly familiar with all jobs to be rated.

(i)   Job   classes  or  grades  are  established.  A job  grade   is  a group   of different jobs  of Similar difficulty or requiring Similar knowledge and  skills  to perform.

(iii)    Each  job  is classified  into  an  appropriate  grade   depending  on  how  well  its characteristics  match   the grade  definitions. For this  purpose job descriptions are  carefully analysed.  In this  way, a series   of job  grades  in  developed and a different wage  rate  is fixed  for  each  job  grade.

(i)This method  is easy  to understand   and  simple to operate.

(iv)  It provides an  opportunity  to develop a systematic  organisation  structure.

(v)   Pay grades  can  be compared with  those  of other  concerns.  Grouping of jobs into  grade   simplifies wage  administration.

(i)  It is very  difficult to write  accurate  and  precise  descriptions   of job  grades.

(ii) Some jobs  may  involve tasks  which  overlap more  than  one grade.  It is difficult to classify such  jobs   in a particular  grade.

(iii)The   system is rigid and  personal judgement is involved in deciding job classes and assigning jobs   to specific classes.

A more systematic and scientific method of job evaluation is the factor comparison method. Though it is the most complex method of all, it is consistent and appreciate. Under this method, instead of ranking complete jobs, each job is ranked according to a series of factors. These factors include mental effort, physical effort, skill needed, responsibility, supervisory responsibility, working conditions and other such factors. Pay will be assigned in this method by comparing the weights of the factors required for each job, i.e. the present wages paid for key jobs may be divided among the factors weighted by importance. In other words, wages are assigned to the job in comparison to its ranking on each job factor.

i. It is a relatively more analytical and  objective method.

ii. As few factors are  utilized the  chances of overlap are

iii. The procedure involved is logical.

iv. The method is flexible as there is no upper limit on the rating of a factor.

v. It is more reliable and valid as each job is compared with all other jobs in terms of key factors.

vi. Money values are assigned in a fair and objective manner depending on factor ranking.

i. It is difficult to understand and operate.

ii. It is a time consuming and expensive method.

iii. The use of present wage rates for key jobs may lead to error in the beginning.

In  a  large   organisation,   there   are several jobs   involving different  skills,   efforts, working conditions,   etc.  Therefore,  a few benchmark   or  representative   jobs  are  selected  from  each  job  category.

The  selected jobs  are  analysed  and  factors   common to all these jobs  are identified. The factors  choosen for evaluation should  be measurable, significant, mutually  exclusive  and   acceptable  to  both   management   and   workers. The  selected factors   may  be  divided  into  sub-factors  as given  below:

The  selected factors  and  sub-factors  are  defined clearly in writing. This   is  necessary  to  ensure   that   different  raters    interpret   a  particular factor  in the  same   way.

Different degrees of each  factor   are  decided  and defined clearly. The  same   number  of degree  should   be used  for  each  factor   so  as to ensure  consistency. For example, the degrees of ‘education’ may be defined as follows:

The  relative value  of various factors   depends  upon   their   significance  to the job.  Maximum points   for  each  factor may  be as  follows:

Point values for different degrees of a factor may  be decided  on  the  basis   of arithmetic  progression  as  shown in the  Table. 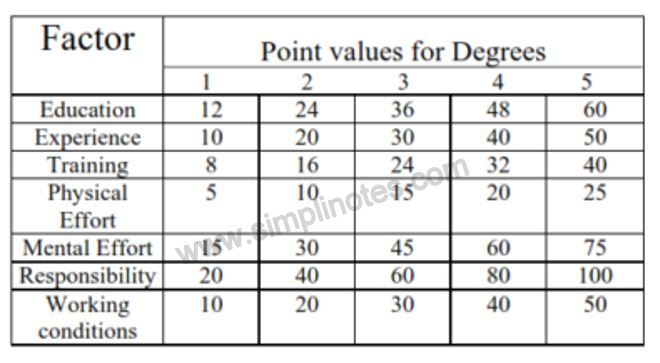 The various points  assigned to different factors in a job  are  added   up to find  out  the total  points   which  indicate the  relative worth  of the job.

Once  the  worth   of a job  in  terms   of total  points   is known these   are  connected  to  money values  keeping  in  view  the  prevailing  wage rates.  A standard  unit  of money may  be assigned to each  point  so as to convert point scores   into  monetary  values.  This  is illustrated  in the Table.

(i) Point method  is  complicated  and  an  average worker  cannot  understand   it easily.

(ii) It is time-consuming   and expensive.

(iii)    It  is  difficult to  apply   this   method  to  managerial  jobs   wherein  the  work content  is not  measurable  in quantitative  terms.