Impact of Information Technology on Production and Operation Management

Vroom’s  expectancy   theory  has  its  roots  in the cognitive  concepts of pioneering Kurt Lewin and Edward Tolman and   in the choice  behavior and   utility   concepts    of  classical    economic    theory.  According    to  Vroom.   people   will  be motivated   to do things  to achieve  some  goals  to the extent  that  they expect  that  certain   actions on their part  will help  them  to achieve  the goal. The theory is based on the simple equation :

Vrooms expectancy theory is presented below: 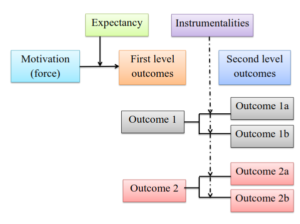 As shown in the figure above the model is built around the concepts of valence, instrumentality and expectancy. Therefore this model is referred to as VIE theory. The various terms related to this model are explained below :

1. Individuals join an organization with clear expectations of their needs, motivation and environment.

3. Individuals seek to fulfill different goals and needs through their organisation.

4. Individuals like to choose among the alternatives in order to optimize their outcome

1. It recognizes individual differences in work motivation and suggests that motivation is a complex process as compared to Maslow’s or Herzberg’s simplistic models.

2. It also clarifies the relationship between individual and organizational goals.

1. Vroom’s theory indicates only the conceptual determinants of motivation and how they are related. It does not provide specific suggestions on what motivates organizational members as the Maslow, Hezberg and Alderfer models do.

2. The theory is complex and its validity cannot be fully tested.

3. The theory cannot be applied in practice.

Recent Posts
Recent Comments
Archives
Follow Us
Pin It
We use cookies on our website to give you the most relevant experience by remembering your preferences and repeat visits. By clicking “Accept”, you consent to the use of ALL the cookies.
Cookie settingsACCEPT
Manage consent