The trade union structure refers to the basis on which unions are organized (i.e. whether they are organized on craft, staff, industrial or general union basis) and to the pattern whereby the plant unions are linked to regional level or national level federations. The unions of different countries have different lines of trade unions depending upon socio-economic compulsions of industrialization and political and economic factors. The types and structure of trade unions differ from country to country and even from industry to industry within the same country. However, Trade unions may be classified on the following basis: 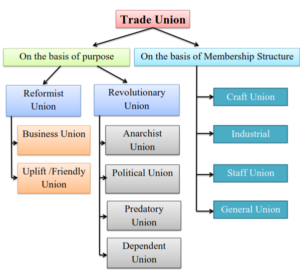 I. Classification based on Purpose

The trade unions may be classified according to the purpose for which they are constituted. Such union may be divided into two categories:

These unions are those which aim at the preservation of the capitalist society and the maintenance of the usual employer-employee relationship, elimination of competitive system of production. They neither seek comprehensive change nor wish to destroy the existing economic, political and social structure of the country. They simply try to modify these in accordance with the desire and requirement of their members, keeping in view the current moves of the society. For example they may wish to increase labour’s share in increased production or they may aim at improving working conditions but enforcing safety measures, they may try to generate increased purchasing power by providing for worker’s various cooperative ventures, insurance associations and educational programmes. Professor Hoxie has further sub-divided the reformist unions into the following two types:

Business unions are the form of labour cooperation in which employees enter the successful business relationships with employers. Such unions primarily represent workers in collective bargaining with their employer. They aim at securing economic advantages to their members through peaceful means. However, they are craft-conscious rather than class-conscious.

These unions aim at destroying the present structure completely and replacing it with new different order which they consider is better. They try to replace capitalistic industry with a socialistic or communistic type of industrial set up. Industrial Workers of eh World (IWW) is an example of revolutionary unionism.

The revolutionary unionism is also of four types:

Such unions aim at destroying the existing economic system by revolutionary means.

These unions aim at changing power through political action. They aim at enactment of laws eliminating the power of capitalist and giving effective power to workers.

This type of unionism has been added by Professor Hoxie. These unions does not subscribe to any ideology. Such types of unions believe in ruthless pursuit of the matter in hand for which they can follow any means without bothering for ethical or legal considerations. These unions can further be divided into two types:

a) Hold up Unions

In these unions, the unscrupulous bosses of the worker’s organizations and unscrupulous employers join hands together and exploit the customers by selling their products or services at exorbitant rates. The workers, if at all, get a very small share of profits accrued due to increase in prices.

These unions do not believe in cooperation with employers. Such unions believe in exploiting anyone and whatever they can, usually by resorting to terrorism or any other ruthless measures.

This union has also been added by the followers of Prof. Hoxie, namely the dependent union. The existence of this type of union is dependent wholly or partly on the other unions or the employees.

Pages: 1 2
Recent Posts
Recent Comments
Archives
Follow Us
We use cookies on our website to give you the most relevant experience by remembering your preferences and repeat visits. By clicking “Accept”, you consent to the use of ALL the cookies.
Cookie settingsACCEPT
Manage consent