Learning theories explain how learning takes place. Many psychologists and behavioural scientists have developed different theories of learning. The most widely accepted theories are as follow:

1. Classical Conditioning
Classical conditioning states that behaviour is learned by repetitive association between a stimulus and a response (S-R association) Jrhe organism learns to transfer a response from one stimulus to a previously neutral stimulus! Four elements are always present in classical conditioning. These are:
i. Unconditioned stimulus (US)—like food which invariably causes to react in a certain way, i.e., salivation.
ii. Unconditioned response (UR)—takes place whenever the US is presented, that is, whenever the organism (dog in the original experiment) is given food (US), it salivates.
iii. Conditioned stimulus (CS)—the object that does not initially bring about the desired response like the sound of the bell.
iv. Conditioned response (CR)—a particular behaviour that the organism learns to produce S to the CS, that is, salivation. 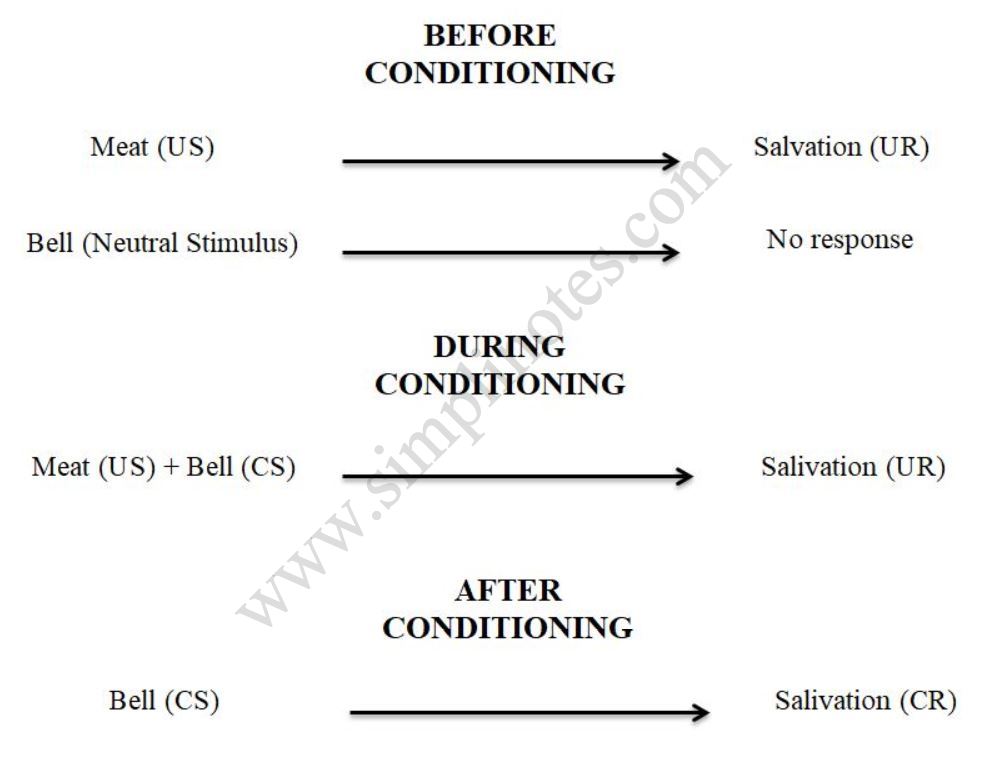 Classical conditioning helps in learning process. Classical condition­ing can be an elicited response to specific identifiable event. For ex­ample, a manager gives good news to the executive whenever he called him in his room (US). After few such occasions he started associating the call to meet in his room with some good news. Therefore, he becomes happy whenever he is called in the managers’ room.

Simple reflexive behavior can be changed by classical conditioning. But the complex behavior of the individuals in organization is not selected and it is voluntary behavior rather than reflexive. Classical conditioning relies on simple cause and effect relationships between one stimulus and one response. It cannot explain the behavior by which people choose one course of action over other.

i. The theory of classical conditioning suggests that human beings also are capable of being conditioned by the first order, second order, third order and so on. It teaches that learning can be transferred to stimuli other than those used in the original conditioning. Again, a conditioned stimulus can have a reinforcing effect under higher-order conditioning. So the theory provides an explanation for the important role of secondary rewards in organizational behaviour. For instance, money acts as a stimulus because it constitutes power to buy necessaries like food, cloth and other materials. When fringe benefits are offered in addition to salary, they have a reinforcing effect on the behaviour of employees.

i. Classical conditioning represents only a part of the human learning process. As Skinner pointed out, it explains only respondent (reflexive) behaviour. This is just involuntary response. But most human behaviour is related to the environment. That is why more money does not always lead to better response.