Propounded by Theodore New Comb which states that – “ Persons are attracted with one another on the basis of similar atitudes towards commonly relevant objects and goals. Once a relationship is formed it strived to maintain a symmetrical balance between the attraction and the common attitudes. If an imbalance occurs attempts are made to restore the balance, If balance cannot be restored, the relationship dissolves. “ 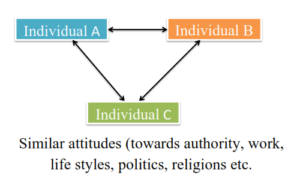 Propounded by Thaibaunt and Kelly. This theory is based on reward-cost outcomes of interaction between employees. Exchange theory of group formation suggests that an individual will (or will not) join a group on the basis of outcomes of reward and cost. Reward for joining a group is in the form of gratifying the needs while cost is in the form of anxiety, frustration, embarrassment, and fatigue. It reward is equal to, or more than cost the individual will join the group. In reverse case he will not join the group.

Other theories related to group formation

Stage theory of group development assume that all teams go through the same progression of stages. Whereas some theories have observed that all teams need not follow the  same sequence of stages. Bales in year 1966 has proposed an equilibrium model, that is based on the premise that group members strive to maintain a balance between task oriented actions. And emotionally expressive behaviours. The group is concerned about both task completion, and maintain relationships among the team members. The team addresses these two concerns as and when they arise, in sequence, in cycles, or even simultaneously at any stage. Another recurring phase model is the Punctuated equilibrium model proposed by Gersick. According to this model groups do not necessarily progress in a linear manner from one step to another in a predetermined sequence but alternate between periods of inertia with little visible progress towards goal achievement punctuated by bursts of energy as the work groups develop. The performance happens in short bursts and during the slumber period the team and its members are busy proving their points of view. Building relationships with each other, resolving conflicts and so forth.

Recent Posts
Recent Comments
Archives
Follow Us
We use cookies on our website to give you the most relevant experience by remembering your preferences and repeat visits. By clicking “Accept”, you consent to the use of ALL the cookies.
Cookie settingsACCEPT
Manage consent